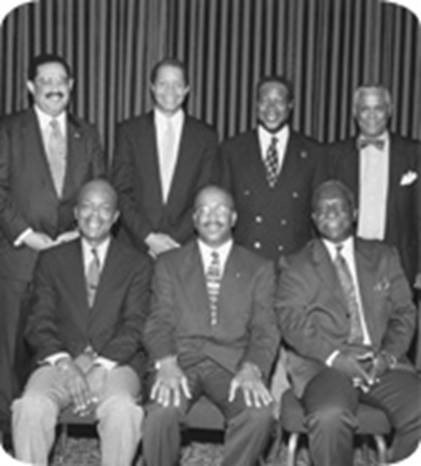 Over 50 years ago the establishment of the National Association of Black Accountants created an organized effort to reform and level the playing field for African-Americans interested and seeking to become CPA’s and accountants or find work in other finance-related opportunities. Overcoming the barriers of systemic racism within theses industries has increased the numbers of minority CPA’s and began a conversation to address minority concerns within the industry that is still ongoing today. Below, find some additional information on the founding members (known as the NABA Nine) and further color on their history and goals.

We encourage you to visit NABA’s website, learn more, and support their mission.

In December 1969, nine African-Americans met in New York City to discuss the unique challenges and limited opportunities they faced in the accounting profession. In that year, there were only 136 African-American Certified Public Accountants (CPAs) out of a total of 100,000 in the United States. This group wanted to establish an organization to address the concerns of minorities entering the accounting profession and to make a commitment to professional and academic excellence.

The following nine individuals who met that month were determined to "make a difference" and let their voices be heard:

The national and local programs offered are designed to support the overall goals and objectives of the Association. These programs provide support to, and create opportunities for, professionals and students seeking levels of accomplishment in the fields of accounting and finance. Today, through the efforts of NABA and other interested groups, there are now over 200,000 African-Americans participating in the field of accounting, of which over 5,000 are CPAs. As a leader in the business community, NABA continues to create opportunities for the purpose of enlarging the pipeline of African-Americans into every level of accounting and finance.

Find some additional reading here via Wikipedia.com to more fully understand the existing challenges that necessitated the creation of NABA;

NABA was established in 1969 by nine African American accountants in New York City, and for forty years has addressed the systematic challenges faced by minority accounting professionals. In 1969, there were 100,000 people who held the Certified Public Accountant (CPA) designation–only 150 of them were African American. That same year, the American Institute of Certified Public Accountants—the professional body that awards CPAs—passed a resolution on the lack of diversity in the accounting profession and established the Minority Initiative Committee, which along with NABA, continues to study and provide solutions that eliminate the barriers to success in the profession by people of color. Today, through the efforts of NABA, the AICPA, and other interested groups, there are more than 200,000 African Americans participating in the field of accounting, of which more than 5,000 are CPAs.

As a leader in the business community, NABA continues to create opportunities to enlarge the pipeline of African Americans into every level of accounting and finance, as it recognizes that the growth of the blacks in the profession remains a significant challenge. Minorities make up slightly more than 25%[2] of enrollments in bachelor's degree programs: 11.5% African American, 7% Asian, 6% Hispanic, 1% American Indian/Alaskan Native, and 6.5% of mixed or unknown ethnicity. At the master's level, African American enrollment falls to just 6%.

Challenges of African Americans in Obtaining the CPA

Given the importance of the CPA designation in reaching top levels of the profession, NABA extends significant resources to help its members achieve this mark and to study the factors that impose barriers to obtaining it. In June 2007, NABA, along with Howard University's Center for Accounting Education, held the first CPA Examination Summit [3] at NABA's Annual National Convention. The convening gathered participants from public accounting, industry, and academia to explore why—despite their increasing numbers in college degree programs—growing numbers of African Americans were not sitting for or passing the CPA examination.

The Summit unearthed a number of issues, including generational challenges, lack of black CPA role models, and exam mechanics. A second Summit in 2008 led to the creation of several programs within NABA and other organizations to resolve these issues, with financial support[4] from accounting firms Ernst & Young and Deloitte.